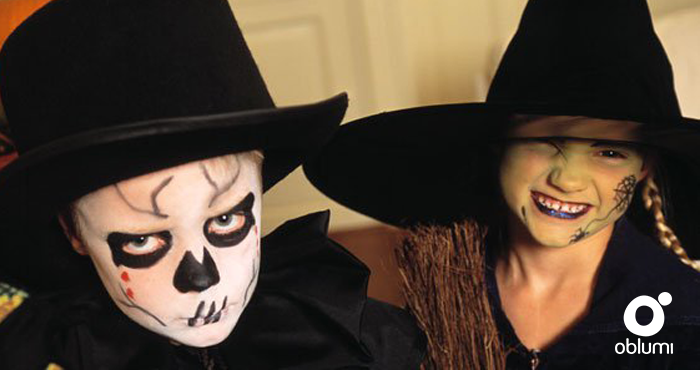 Here they come, slowly by slowly but with a certain security, the zombies, the ghosts, the monsters, the witches and Draculas for each of our taste. It is about to be celebrated the Halloween and in Oblumi we love to take part at the party, and we want to take you as well! Every party, which is celebrated in the family, is worthy to be cheered. And if this comes with having fun with kids and some day off, it is even better!

It is true that not everyone likes to cherish this holiday, especially if the country one was born is not USA or UK. Many of us might think that this is an American holiday (US mainly) or does not have much to do with our Latino-European culture.

Therefore we would like to share with you a little story of this pagan festival. What we know today as Halloween, has been celebrated now over more than 3000 years by the Celts, a warrior people who inhabited areas in Ireland, England, Scotland and France. According to the tradition, the night of Halloween has its origins in the Celtic festival known as Samhain, which derives from Old Irish and means “Summer’s End”. It is therefore the end of the harvest season in the Celtic culture, the “Celtic New Year”. Gaels believed that it was a time when the walls between our world and the next became thin and porous, allowing spirits to pass through, come back to life on the day and damage their crops.

This party was assimilated and accommodated with the Roman occupation to the Latin calendar to later be adopted as a Catholic holiday, as the night before All Hallows Day also know as All Saints’ Day. Hence its theme related to souls which goes to purgatory, ghosts and other undead…

It was not until 1840 that this festival crossed the Atlantic and arrived in the United States and Canada, where it had much more success than in other parts of the world.

Halloween night as we know, has always been linked to the souls, the saints, the dead, the death people coming alive … The end of the life and the beginning of a new existence.

Parents who have children love this and who has not ceased to be known that one of the most fun things there is disguise. We love Halloween because is the only night that we can “afford” to be “bad” for one night, with extra powers being witches, ghosts and scary jokes or fairy to spend the night with candles illuminate the path of the saints…

The truth is that children like this party and we here in #TheNowFamily love having fun with them. Everything that invite to a good laugh is welcomed here in Oblumi house. That is why we search the net for the best costumes that there are for parents, grandparents, children and grandchildren. Did you know that even pet can dress up and be the scariest part of the family?

1. Harry Potter to the hole family.

The most famous magician saga’s has worthy Halloween characters for the whole family. From the baby owl, to the great Rubeus Hagrid …

Even for the pet…

2. For the geeks parents.

There are costumes for everyone. Who does not remember the legendary movie “Ghostbusters”? Video games also bring great costumes like those we show you, Big Daddy and Little Sister from Bioshock, perfect for fathers and daughters. And we can not forget the classic witches.

In #TheNowFamily pets always have a special place.

Babies are our weakness. This time we choose this skeleton costume that will make your baby a sympathetic character at the Halloween Night.

And you, what have you prepared for Halloween? Enter our contest “Trick or tapp?” and you could win the thermometer to measure your Halloween fever.